“It’s out there at sea that you are really yourself.” — Vito Dumas

Day 3 – The Gran Pitons and Soufrière: 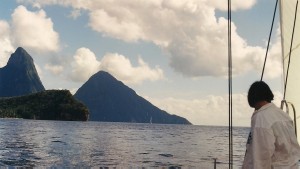 Karens watches as we approach the Pitons from the north. 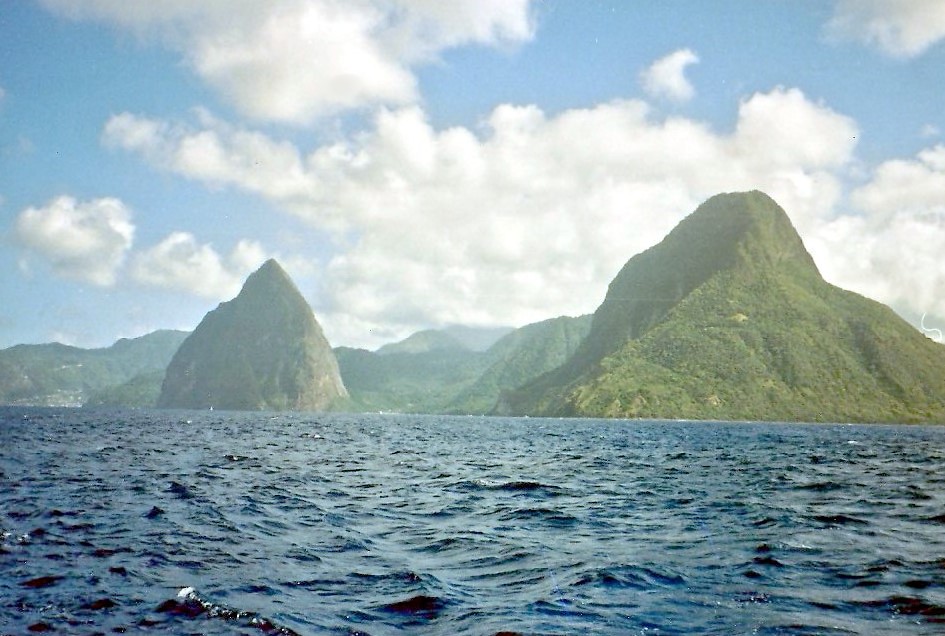 The next morning we were awakened by Alexander, who had brought us bread and fruit for breakfast. We paid him for his gracious efforts. I sat crossed legged on the deck enjoying the fresh bread and fresh air. I watched other boats come and go, and waved to our fellow travelers. This was Caribbean sailing life at its best.

After breakfast Alexander returned and offered to take us snorkeling. “I know the best spot. Alexander only knows good places,” he boasted. As our sloop was still anchored to a palm tree, we all climbed into Alexander’s wooden boat in our bathing suits and snorkeling gear. He was right. It was an excellent location along the volcanic bluffs of the Pitons. We were the only sea tourists there that day. I put on my mask and snorkel. This was new for me. Those first few breaths through the snorkel under water felt a little claustrophobic. It was a foreign feeling not being able to breathe through my nostrils. But I soon got into a Zen-like rhythm breathing slowly and deeply through the snorkel barrel, listening to rush of my breath. A flash of yellow and black flickered past me; it was an odd-looking needlefish, like a colored stick shimmering in the water.

The undersea experience was fantastic — dozens of tropical fish in every color imaginable, like the star, parrot and trumpetfish, and blue chromis. More than 150 specimens of finfish have been recorded at the base of the Pitons. In addition, there were underwater landscapes of flower and leaf coral, sponges and sea anemones. We snorkeled and took underwater photos for a few hours. We were in paradise. 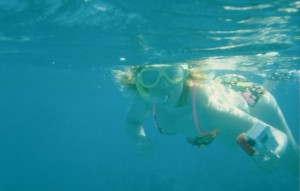 Snorkeling near the Pitons, St. Lucia 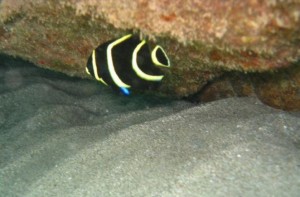 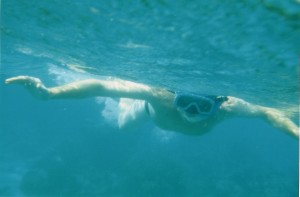 My friend, and shipmate, Patrick.

While we were snorkeling and taking underwater photos Alexander left, which meant when we were ready to return, it would be a long half-hour swim back to the boat. But where was he? He had our keys! Was our boat being looted while we kept our heads below the surface snorkeling? Limbs weary, we got back to the boat and… there he was. He’d gone into town to make dinner reservations for us — “two fish, one chicken” — just as we’d requested. Our mistrust had been misplaced.

In the evening we walked along narrow paved roads, followed by dirt and stone. It was a long walk after our busy day. The restaurant was on the outskirts of Soufrière. Its name was “Captain Hook’s Hideaway”, and hidden it was. It belonged to a local friend of Alexander’s. The Creole-style chicken and fish simmered for a long time. It had been prepared especially for us, and was so tender with a tasty mix of island spices. While we dined, Alexander — who was great — had stood watch over our dinghy so that we could make it back to our sailboat mid harbor. Missing dinghy motors was a common occurrence in the Caribbean. Of course, ours was already a casualty of the turnover in the salt water and we now had to row it. It stopped working shortly after Pat’s run-in with the waves at Rodney Bay. The next morning we had to prepare for another long sail to Wallilabou Bay on the island of St. Vincent. We retreated to our respective cabins for some much-needed sleep.