“A ship at harbor is safe, but that is not what ships are for.” — John A. Shedd

Rodney Bay is on the northwestern coast of the island. It is named after a British naval officer, George Rodney (1718-1792). The outer boundary of Rodney Bay is Pigeon Island, which we nearly circumnavigated the night before. Here the admiral had built a fort to view any movements in France’s naval base in Martinique.

In the morning after clearing customs (we left French territory and were now on British soil), we headed for the local bakery for strong coffee and cassava bread. We met other sailors there too, swapping stories and making recommendations for ports and locales. After our missteps the day before, Karen and I had a newfound trust in one another, and also felt we needed to take on more responsibility for the boat, aiding our skipper Patrick. There could have been a very different outcome to the dangling anchor (due to a defective anchor windlass) and overturned dinghy.

I was enjoying the food, the folks we met and the natural sights. I could have stayed and whiled away the hours, but we had another 21-plus nautical mile journey ahead of us to the Pitons and the island town of Soufrière. I had learned from our mistake — leaving too late means entering the port after dark — and that burdens you with unnecessary stress and work. Just walking around on the boat is work, as it pitches and rolls in the ocean swells. Sailing is a physical pastime. You are constantly shifting your balance and hopping over lines, ducking to avoid the boom when tacking, winching the sails and looking for any hand-hold when on a wet, slippery surface. 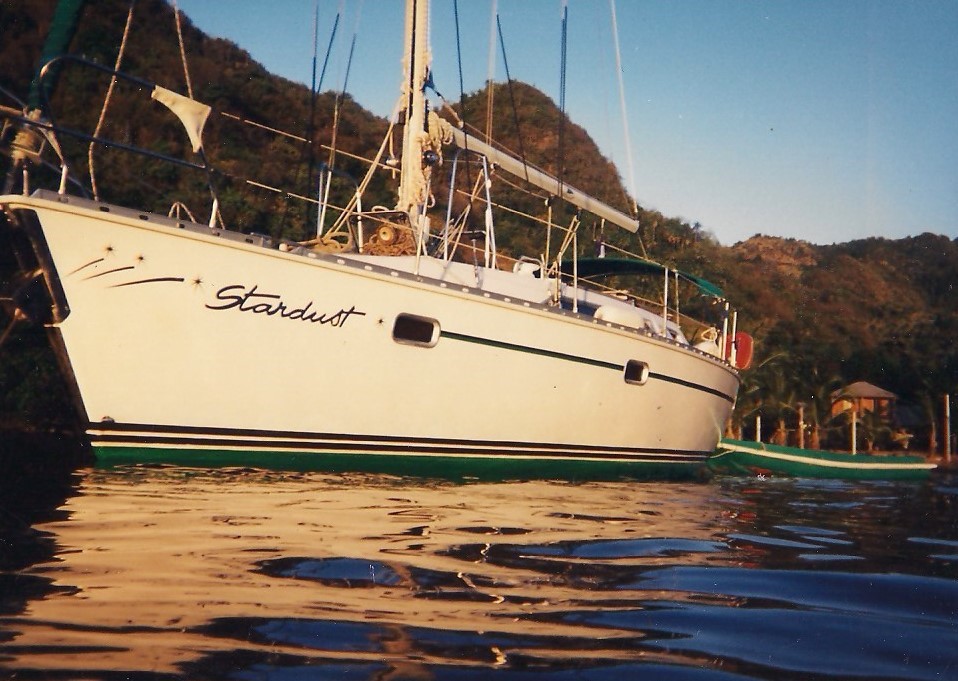 Our 36-foot Sloop, “Old Vic”, with our motorless dinghy tied up astern.

We pulled up our anchor around 11:00 am and set sail for the Pitons. Our fears of another night anchorage were unfounded. We arrived at Soufrière on the southwest coast of St. Lucia in the late afternoon and were instantly surrounded by dozens of boat boys. The first to greet us nearly a half-mile out was “Alexander the Great”, a Rasta with a wide smile and dreadlocks cascading down his face. “I only show you great places,” he beamed. “How do you like the Caribbean?”  He stayed with us continuing his happy banter to ensure that we would want — and pay for — his friendly services during our stay. Entering the bay we took down our sails as the winds rushed through the peaks of the Pitons, and motored instead to find a good place to anchor.  The closer we got to the Pitons, which are two volcanic peaks rising out of the sea, the more boat boys appeared. They offered fruit and trinkets, and friendly advice. 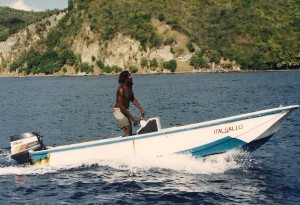 Some boat boys have rowboats, others outboards, and they have the advantage to meet incoming sailors before they enter the bay.

There was a powerful undercurrent at the anchorage outside of Soufrière. It proved more challenging than we first thought. We tried several times to drop anchor, with limited success. It would drag across the sandy ocean bottom. We finally tied three lines together to create a long enough stern line and tied it to a palm tree on the shore. The boat boys watched our antics with amusement. But we had learned that the sea has no remorse. 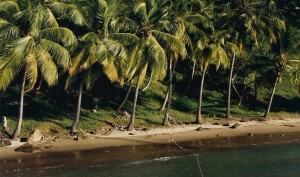 Our stern line tied to a palm tree. 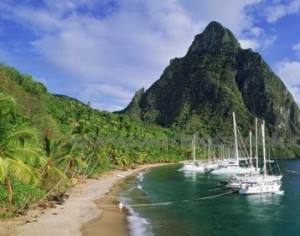