“On a day when the wind is perfect, the sail just needs to open and the world is full of beauty. Today is such a day.” — Jalaludin Rumi

We set sail again, back to Union Island, our final destination where we would return our chartered boat, “Old Vic”, to Stardust. The winds were at a perfect 20 knots. We rounded Mayreau and headed 200 degrees south to Union Island. Our bodies were fatigued from all the hard work of sailing, swimming, snorkeling and the late nights of partying and playing. But honestly, our only complaint was that our trip would soon be over.

As we sailed into Clifton Harbor on Union Island we immediately looked for a mooring buoy. This is not a safe harbor when the pre-dawn winds pick up to 40 knots. Luckily we found one. Using the grappling hook, Karen and I fished it up and tied the line over the bow cleat. Safe. We had sailed 130 nautical miles to nearly a dozen island ports in ten days. What an adventure! 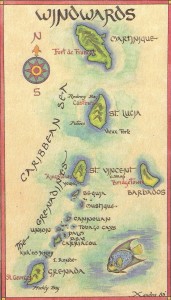 What I wanted now was a shower. Layers of salt, sweat and suntan lotion had coated my body for days. Washing in the cold shower, lathering up my hair, was more than a small pleasure. Karen and I marveled at our brown bodies, leaner and stronger than when the trip began.

Clean and shining like new pennies, we headed for the Anchorage Yacht Club for a cold beer. The three of us toasted to our successful sail.  Patrick had been a good skipper, learning from his mistakes. We two women had made a few of our own. But sailing is an imperfect sport. As the American yachtsman, Dennis Conner described it:  “The trails are unmarked and one has to make intelligent decisions under constantly changing conditions. You have to decide about where or even whether to go.” 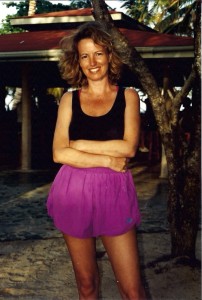 Showered and happy in the Carribean.

We took a boat taxi to return to our moored sailboat. We were tired. The rigors of the trip had caught up with us. But this was our last night. We could always sleep tomorrow. We decided on Clifton’s for dinner. Jean Claude, the young taxi boat driver recommended the place. For a young man of 22 he had a certain wisdom. “You make sacrifices to be in a place like this,” he said, as he dropped us off at our sloop.

We chose to take our dinghy to Clifton’s for dinner and tied it to the dock. There seems to be a secret to staying dry while boating, which I am not privy to, because wherever we went I arrived with wet feet and a wet backside. It’s a small price to pay. Unfortunately, our skipper Patrick got the worst of it on our final evening. As he hopped from our boat to the dinghy, he fell, waving his arms in near-slow motion, hoping to steady his balance, but landed in the water between the two boats. It was hard to contain our laughter. We shrieked and howled at Patrick’s pratfall… except the boat keys were in his pocket, which presented another problem as they floated away in the marina.

Our dinner was a delicious feast. I ordered fish, as it’s always fresh in the Caribbean — very fresh — I had to turn my plate around so the fish would not stare at me as I ate it. Half way through the meal, we could hear the steel drums begin to play at Lambi’s next door. The music was enticing, so we decided Lambi’s would be our next stop.  The music had everyone on the dance floor. Karen and I joined in. We saw Wally and others from Stardust — Fritz, Jean Claude, Herman — and the Bavarian sailors turned up too. “We be jumping up now man.”

It was the perfect ending to our Caribbean adventure. 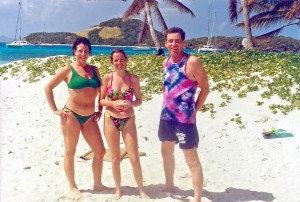