“The beauty of sailing is the trail is unmarked. You must make intelligent decisions about where and even whether to go.” — Dennis Conner

Arriving in Martinique I learned that the Indians used to call it “Madinina,” which means island of flowers, because of its lush tropical vegetation. It lies in the middle of the West Indies and is part of the Windward Islands in the southern Caribbean Sea. They are called the Windward Islands because the prevailing trade winds blow from east to west and were more “windward” to sailing ships arriving from the New World. The nearest neighbor to Martinique is the English-speaking island of St. Lucia. Our sailing adventure began in Port Le Marin near the city of Sainte-Anne on the southern tip of Martinique. 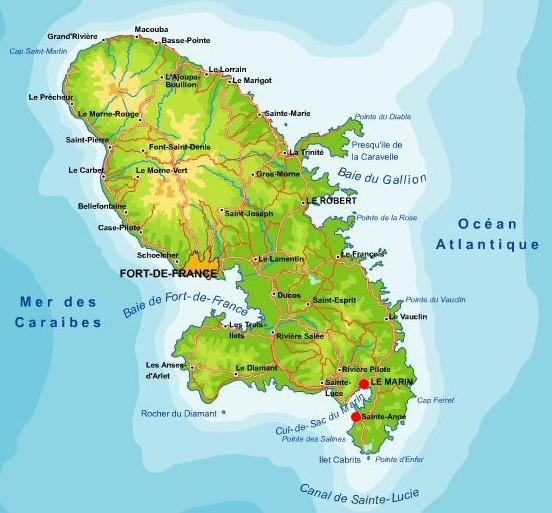 My mind was a whirlwind of thought prior to the trip, preoccupied with work demands, a promising romance fading to a friendship, and the apprehension and excitement of a 10-day sailing adventure with my companions, Patrick and Karen. St. Anne was a small island town with few stores. Many islanders spoke only French, as Martinique was previously a colony of France and still considered a DOM under French authority. We made our way around town on foot, picking up provisions for the trip. 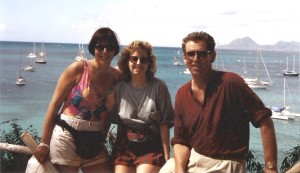 The 3 of us on Martinique before we set sail.

Everything seemed to take longer than expected. We still needed to go over the boat, its motor, the sailing lines and winches, and generally familiarize ourselves with the how the three of us would run this 36-foot mono-hull sloop and navigate to the islands over the coming days. Patrick had rented the boat — a bare-boat charter through Moorings / Stardust — and was naturally the Skipper. I had done the most sailing of us two ladies, so I would be the First Mate. Karen was the newcomer, as she had only accompanied us on one or two previous sails out of Oxnard, California to Anacapa Island, which was one of our regular sailing routes and a mere 12 nautical miles off the coast. This sailing adventure, however, would cover more than 130 nautical miles and multiple Caribbean islands spanning 10 days, and we would end our trip in Grenada. 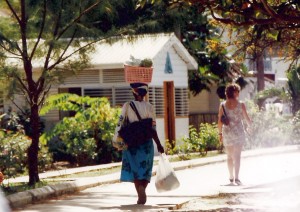 Martinique’s contrast of cultures — a local woman and a tourist.

It was nearly 3:30 pm before we motored out of the harbor and set sail for the 24 nautical miles south to Rodney Bay on the island of St. Lucia. Crossing the channel would require visual navigation. The harbor master chastised us for leaving a little late, but we were not overly concerned. The sun was up, a balmy breeze lifted our spirits and filled our sails. The racket in my mind was lulled; smooth sailing at last. I could feel the tug of the wind in the sails through the ship’s wheel. With the motor off, the only sound we heard was the slap of water against the hull as it heeled slightly. We were making good time, about 6 to 8 knots, (thanks to those ever-present trade winds) and could see nothing but ocean. Incredible feeling. It’s a stillness that silences the mind and soothes the soul. 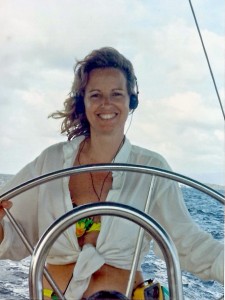 Happy at the Helm

As the sun set and we could still see no land, 24 nautical miles suddenly seemed really far. Had we misread the charts? Did we make a navigation error? Night was soon upon us. It was pitch black, except for a half moon and starry sky. We could finally see the dark shape of land in the distance, but in the darkness it was impossible to make out the entrance to the harbor. We motored back and forth for an hour or so searching the land mass for the harbor and marina. We could not reach anyone on the radio and we did not have a cell phone. Finally our skipper, Patrick, decided to drop anchor and take the dinghy to shore to find the entrance to the harbor. As the adage goes, “when in doubt, ask for directions”.

I laid down on the deck to enjoy the stars and my mind busied itself with thoughts of my relationship woes, and wondered if leaving work during beta testing was a good idea. Karen nervously watched the landscape in the distance. She was sure we were drifting. I broke away from my mental distractions and star gazing, and decided that in order to soothe her fears we would take the flashlight to the bow of the boat and I could show her the anchor line. She shrieked when she saw the anchor was dangling in mid air and we were, in fact, adrift. I had no time to panic. I scrambled to mid deck and started the engine. “Don’t worry, we’ll just motor in a circle until Pat returns,” I told her bravely, assuaging my own fears as much as hers.

It seemed like hours when I suddenly head Pat’s faint voice calling my name, “Lisa, Lisa” from somewhere in the distance off the port bow. Was I turned around, or was his voice coming from a different direction than when he left with the dinghy? Why was he calling and what did he want me to do? I could not risk motoring into a rocky shore or perhaps run aground to search for him. Karen’s panic was now nearly uncontainable and I didn’t know how long I could placate her, telling her that everything was under control.

Suddenly out of nowhere Patrick motored up to our boat. I was very relieved as we tied up the dinghy. We compared our stories of the night’s events. It turns out we had sailed north of Pigeon Island (which separates Rodney Bay from the north coast)  and had not traveled far enough south to see the harbor entrance — a small sliver of an inlet leading into the marina. After Patrick found the marina, and in his rush to return to the sailboat, he flipped the dinghy in the ocean waves. With saltwater in the motor he could not get it started. We must have been under a few lucky stars, because he finally got the dinghy motor running again and returned to the sailboat (although that would be the last time it would run). We were then able to maneuver into the harbor with Pat’s newly-gathered information and finally anchored for the night.

Exhausted, I retreated to my cabin. I feared I might feel a little claustrophobic in such tight quarters, but with three small portholes I took a deep breath and exhaled my pent-up fears and emotions setting them free into the night air. We were now safely anchored on the island of St. Lucia. 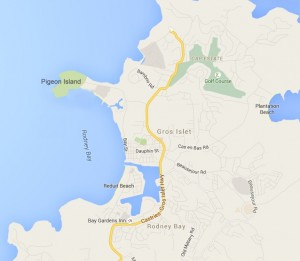 In the dark of night we did not sail far enough south of Pigeon Island to find the small entrance to the harbor.