When We Were Young:

Some of my fondest childhood memories were when my family lived in Groton, Connecticut along the Thames River. It was home to a fleet of ships, including the one on which my dad was stationed, the USS Fulton.  I remember visiting it on occasion and even going out to sea, and taking family trips to Mystic Seaport. Mostly, I remember our house on a cul-de-sac next to the forest. It was so beautiful in winter — lots of pure white snow. I was in the first grade, barely six years old. My brother, Mark, was eight. It seemed an idyllic childhood at the time. 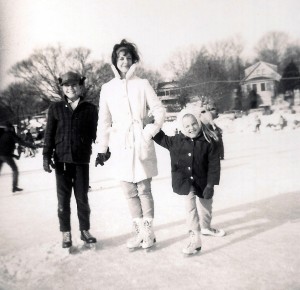 In the winter, all the kids would go sledding after school. My brother and I had a Flexible Flyer sled with wooden slats and red runners, which we shared. We would often fight over whose turn it was, but then he would grab it and race down the hill in a cloud of snow. He was bigger, stronger. I felt left out. I stood rejected at the edge of the hill in my snowsuit watching, waiting for my turn.

I kept calling his name, “Mark, Mark.” He finally came up with a solution to our single sled problem, which was to lay me down on my belly, grab my feet and with my hands up Superman-style, he shoved me down the hill. I think that little red nylon snowsuit was faster than the sled.

We had so much fun — a hillside full of kids laughing and giggling, the crunch of fresh snow under our feet and the white-topped trees shielding us from the wind. There were perfect little white snow crystals everywhere — on my snowsuit, in my hair and in my boots.

After a dozen or so of these Superman slides — little shove, slide down the hill, scramble back up and repeat — my boots were filled to the top with snow. My feet were cold and numb. As the sun began to set behind the hill we knew it was time to go home, dinner time. No one had to call. We were a military family. Dinner would be on time, and so should we. We had to hurry.

To my brother, I was agonizingly slow. But my feet were numb and cold, and could walk no more. Mark sat me down on the sled and started pulling me home. The hurt and rejection from earlier melted away. I felt so proud. This was my big brother pulling me home.

That was the coolest thing that could happen to this little girl that day.

About two years later my family split in two — literally. The divorce divided us. We were living in Africa then, a long way from our snowy cul-de-sac. We were stationed in Asmara, Ethiopia in a mixed culture of Italians and the indigenous Amharic and Tigrinya people. “Gerry carts”, camel caravans, three-wheeled taxis, goat herders, buses and cars shared the same roads. It looked like the beginning of civilization. As exciting as it was for us kids, maybe it was too much for mom. I was eight when she left, Mark ten. At eight I was still “daddy’s little girl”, and I could not really fathom what her leaving would mean. For Mark, it was his world and it had just ended. 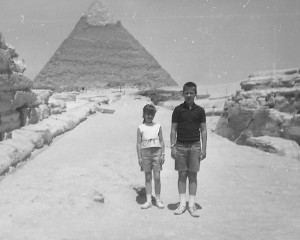 A visit to the pyramids on our way to Ethiopia

For nearly 10 years we criss-crossed the globe from our early days together in Connecticut. We returned to the US from Ethiopia after a nearly four-year stay in the Horn of Africa with trips down steep switchbacks to the Red Sea city of Massawa, eating zigni with our Ethiopian friends, fighting off baboons and other crazy adventures. Our father got orders for Washington DC, and we had the chance to see our mother again in Virginia, where she lived with her new husband, Bill, also a military man.

Living in close proximity made for frequent visits. It was a fun and happy time — at least on the surface — but the three-year and 7,000-mile gap was a distance too far for me to bridge. Mark made more of an effort, but the new man in mom’s life had already eclipsed his limelight.  As brother and sister we became the pendulum between our parents: one month in Virginia, one in DC. Mark eventually remained in Virginia, and I in DC with dad.

Then came decision time. The military keeps its men on the move. Barely stateside two years and dad got orders to southern Spain. Mom’s husband, Bill got orders to Keflavik, Iceland. As young as we were at the time, our parents laid the decision squarely on us. Mark chose mom and the move to Iceland. I chose dad who would be stationed in Spain. The divorce would now put Mark and I on different continents.

For me the initial move was a whirlwind of excitement, fear, a language barrier and loneliness. Dad was busy meeting his new military challenges in Rota. We did not have housing yet. I spent a month in a hotel learning a few words of Spanish and trying on new identities for my new school. For Mark, I do not really know how things were. He never wrote. Phone calls were non-existent.  We had a phone without a rotary dial or buttons. You picked up the handset and hoped a Spanish operator would answer. Southern Spain under the waning days of Franco was backward for its time. I couldn’t imagine Iceland was much better. Mom’s occasional letter hinted at Mark’s troubles, but mostly painted a picture of “happy days”. 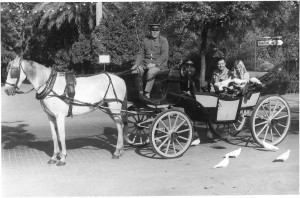 It was a colorful four and a half years in Spain: Ferias and Sangria, bull fights at famous Corridas, trips to the Mediterranean and Morocco, and long summers on the beach. I graduated from an American High School in Rota, Spain. Meanwhile, my father had married a Spanish woman and started a new family.  It was time to strike out on my own. 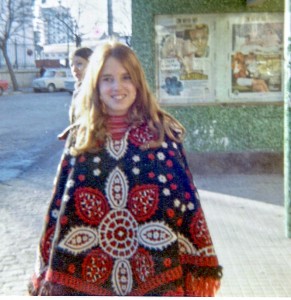 Hanging out in Cádiz wearing a traditional Spanish poncho.

University bound, I moved to Blacksburg, Virginia to attend Virginia Polytechnic Institute. My brother, mother and her husband Bill — who had retired from the military — were by this time living in California. Our once close-knit family from the Connecticut cul-de-sac was spread across the globe, and new families had formed.

After one year at Virginia Tech, I decided that the hills of the Blue Ridge and Alleghany mountains was not a place I wanted to call home. It was a southern culture that felt foreign to this well-traveled girl. I wanted to return to Spain. I called dad to share my enthusiasm about my return home, but my decision was preempted by his wish to move back to the US. He too had since retired from the military. He was planning a move to southern California, because he believed that with its large Spanish-speaking population, it would be the best place for his Spanish bride and young family. (My half-sister Vanessa was born in Spain, but would grow up in southern California.)  My dad’s plans were to move in the fall, but this was late May, school was out, and I had no place to go. I called my mother and decided to move in with her for the summer and see what the fall would bring.

I flew to California, and as I stepped off the plane my mother was there to greet me. It was warm, but awkward — guilt about our choices, I suppose. She chose to leave me, and I chose to live with my father. My brother did not come. I was disappointed. It had been nearly 10 years and we had changed a lot. I wondered what he was like. We grew up…  without each other. It had been 10 years and he didn’t come.

It turns out he was in boot camp at the Marine Corp Recruit Depot (MCRD) in San Diego. He would be there at least another three to four weeks. My mom got this great idea that we should go down to the base and drive around the barracks and training grounds, that way I could get a glimpse of my brother’s new life.

We drove through the base gate and to our right was a large platoon of marines, young recruits going through their drills. “Left, left, left, right, left.” It was a familiar cadence I would hear all afternoon. It was hot. The recruits were in shorts and combat boots with shaved heads; platoon after platoon. I said, somewhat hopeful, to my mom that maybe we could find Mark. She laughed at me and pointed out yet another platoon of recruits, who were fighting with pugil sticks — padded weapons that look like giant Q-tips — and they too were in combat boots and shorts. We rounded another corner and there was another platoon. “Where are they housing all these men?” I wondered. They were all working, out in the hot sun, sweating, shirtless in shorts and combat boots.

Mom was right. Finding Mark would be the veritable needle in the haystack. We did one last pass and headed toward the exit gate. “Stop the car,” I yelled. “There he is.” She reluctantly pulled over. I sprinted out of the car calling his name loudly, “Mark, Mark”. All of the soldiers stopped and turned. My mother cringed and sunk a little further into her seat.

Suddenly one of the soldiers broke formation and ran toward me. It was Mark. It had been 10 years, 10,000 miles, and 10,000 men who all looked alike, but I still knew my brother. We hugged each other and the great divide seemed to melt in that moment. It was a magical. I expected all the marines to turn around and cheer like a scene out of a movie — our embrace in slow-motion.

Instead, a commanding voice shattered the stillness, “Private Dee!” “Yes Sir,” Mark boomed as he raced back to his Sergeant. “Private Dee reporting Sir.”

We had to leave. As I looked back through the car window I saw my brother on the ground doing push ups, counting aloud “21, 22, 23.” Life was funny. Mark was my big brother who pulled me home a quarter of a mile on our Flexible Flyer sled, and today his strength was still being tested. It made me smile.

That was the coolest thing that could happen to this little girl that day. 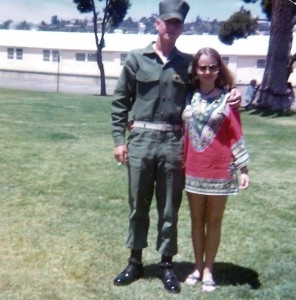 Mark and I at the completion of boot camp at MCRD.