“It is the set of the sails, not the direction of the wind that determines which way we will go.” — Jim Rohn

Day 6 – Charleston Bay, Canouan Island
The morning began at a leisurely pace. We sipped on French coffee on our boat, compliments of Stardust, the charter company in Martinique. We then rowed into town (Bequia) for final provisioning . We purchased all the usual necessities:  water, bread, fresh fruit, cheese, the local beer, and made one final visit to the post office to mail off a few cards. There would be fewer accoutrements of civilization on our next island anchorage. 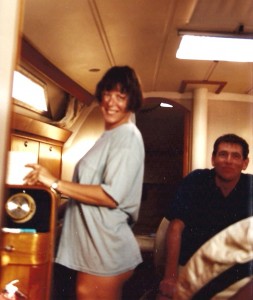 My shipmates Karen and Patrick share a leisurely morning on our 36-foot sailboat, “Old Vic”.

It was an easy sail today, 25 nautical miles from Admiralty Bay to Canouan Island. Canouan is part of St. Vincent and the Grenadines, and is located roughly midway between Mustique in the north and Union Island to the south. It sits in the middle of the Grenadine archipelago, hence its nickname “the heart of the Grenadines”. The winds puffed at an easy 20 knots with irregular swells. After an hour or so at the wheel, I could feel the boat’s rhythm in my blood, swaying to and fro. We were in perfect harmony together — list to port, swoosh down the swell and drift to starboard. The ancient rhythm of the sea is something one must graciously accept.

The idyllic shores of Canouan

Canouan is a tiny place compared to her “jump up” brother at Admiralty Bay. The island itself is about three miles long by one mile wide, and is accessible only by boat or small plane. A half dozen boats lined Charleston Bay and a small near-empty hotel decorated the shore. A few homes dotted the hillside. The anchorage here was easy. We had our anchor windlass repaired in Bequia; it had been the source of some of our anchoring troubles at previous ports. We let out the anchor, immediately had a firm grab and were set in minutes. The real treat at Canouan was the night sky. The moon was waning, so the sky was rich and dark. We laid on the deck, looking up and watched the night sky. It was abundant with stars — so many stars, so many wishes. A few shot across the sky, winking at us as they went.

“For my part I know nothing with any certainty but the sight of the stars makes me dream.” — Vincent Van Gogh

St. Vincent and the Grenadines are considered one of the best spots in the world for star gazing.

By day, Canouan was stunning with its long ribbons of white sands, wide shallows and coral reef. In the morning we rowed the dinghy to shore and hiked across the island to the eastern side. The distance is one mile across the island as the crow flies, however, hiking distance is a bit more as you hike over hilly terrain. The highest peak on the island is Mount Royal. At one point we could see both shores of Canouan at the same time, the west side where we had anchored, and the east. A barrier reef runs along the eastern side of the island, which are its Atlantic shores. We chose to snorkel there. 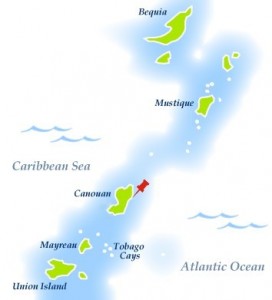 on the western side of the Grenadines is the Caribbean Sea; on the eastern the Atlantic Ocean. 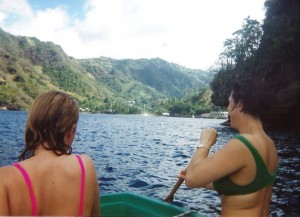 Karen and I Paddling our motorless dinghy.

It was a fabulous experience:  turquoise crystal-clear waters with little coral reefs and powder-white sandy beaches. There seemed to be a limitless number of fish — white angelfish, needlefish, blue chromis and small sharks. I saw a few lobster as well. 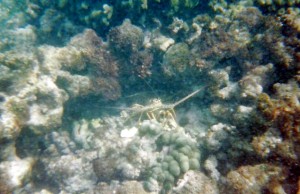 Lobster in Canouan’s barier reef on the Atlantic.

The current was strong. I stayed under so long I got a cramp in my foot from the constant flipping of my fins, and my finger tips wrinkled like raisens. We then hiked back across the island with towels on our heads to protect us from the strong midday sun. We were so hot when we returned to the dinghy that rather than climb aboard and row, we swam back to the boat, pulling the dinghy behind us. We thoroughly enjoyed our stay, but it was time to pull up the hook and set sail again.

As we sailed through the southern Windward islands we could see them dot the horizon like so many bonbons, beckoning us with their white beaches and turquoise waters. It was breathtaking. The only thing that spoiled our view was the plume of black smoke coming from the engine as we motored out to sea. We turned it off and scrambled quickly to raise the sails. I was at the helm steering southward with the wind at our port and stern. It was just another obstacle to overcome. I guided the boat out onto the open seas and slipped past Mayreau in the direction of Union Island. Our original plan was to sail to Mayreau, but we radioed ahead and found that help for our ailing engine was available on Union Island.